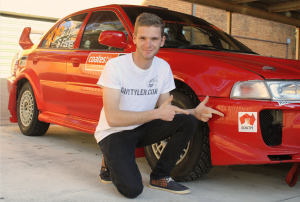 Guy Tyler and his Navigator Steve Fisher of Triple Seven Rallysport are set to compete at Rally Australia this weekend. Held on the beautiful Coffs Harbour coast, the team is a long way from their home in South Australia.
Rally Australia is the biggest rally in the Australian Rally Championship with the event incorporating the 10th round of the World Rally Championship. The Triple Seven Rallysport team is the only crew from South Australia to be competing and are extremely proud to be representing their state.
“We’ve travelled a long way to get here, and I’m really keen to show the world what we’ve got!” says Tyler, who is leading the South Australian Rally Championship after winning the recent Copy World Walky 100.
The team has also been very busy repairing and preparing their Mitsubishi Lancer Evo 5 to the highest standard possible. The car sustained a fair amount of damage from their hard fought win but through a lot of hard work and help from some great businesses, it is as strong as ever.
“We have made a few improvements to the car and are hoping that it will help in our aim to get on the 4wd Series podium this weekend,” says Tyler.
In the bid to get to the Coffs Harbour event Tyler has been fundraising in his local community. Initially Tyler had no set amount he was aiming to raise. Tyler managed to raise enough funds through fundraising events and a short crowd funding campaign to cover the Rally Australia entry fee and petrol needed to get the team to the event.
“I couldn’t believe the amount of support we received from the community. I am truly honoured to be representing South Australia and hope to make all those who helped to get us here proud,” says Tyler.
You can stay up to date with the team during Rally Australia via the following social media:
Facebook: 777 Rallysport
Twitter: @Guyrally
Instagram: @Guyrally www.guytyler.com
Triple Seven Rallysport would like to thank the constant support of their sponsors:
Neat Gear Boxes
Walkers Creative Art
Willunga Tyre & Battery