Guy Tyler to represent the state for Junior British Rally Championships in 2016.

Published by The Times, written by Emmalie Balnaves-Gale on February 24th 2016. 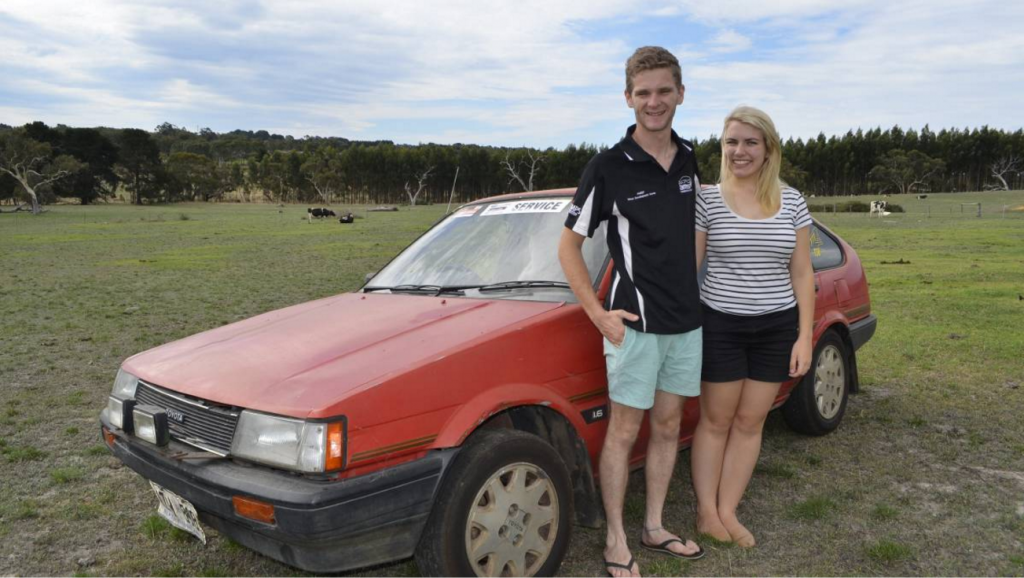 Guy Tyler and Evangeline Mcallan with Guy’s first car, the 1985 Corolla, on his dairy farm in Mount Compass.

MOUNT COMPASS – Guy Tyler, from Mount Compass, has sold his most prized assets to fund his opportunity to represent South Australia in the Junior British Rally Championships 2016.

The ex-dairy farmer has been racing towards this competition for 10 years, since he first began driving his 1985 Corolla across his family’s farm on his learner’s permit.

Guy first raced officially at 16 on the outskirts of Mount Compass in a junior development program at the Southern Districts Car Club.

The 25-year-old motorsport star and his navigator, Steve Fisher, will be the sole racers to represent the state in five rounds of the Rally Championships across the United Kingdom throughout the year.

The racing duo have dominated their way through South Australian and Australian Rally Championships over the years and are ready to take on the world.

“We’ve put in a lot of hard work over the past 10 years to get there so it would mean everything to me to compete,” Guy said.

In 2015, Guy was shortlisted for a spot on the Vauxhall Motorsport Junior Rally Team but was unsuccessful without the funds he needed to provide to support the team.

The Vauxhall Motorsport Junior Rally Team accredited Guy’s abilities with an alternative opportunity to drive a Ford Fiesta R2 for the Championships.

The Championships are split into seven rounds and Guy will compete in all but two with my most expensive buy-ins.

Guy and Steve will head to Wales on March 5 and 6 for the first round, then England for the Pirelli Carlisce Rally on April 30, before the Scottish Rally in Scotland on June 25 and the Nicky Grist Stages in Wales on July 9 and 10.

Guy is most eager to experience his finaly rally for the tournament at Isle of Man on September 15 to 17.​

This Saturday, February 27, Guy and his girlfriend Evangeline will move to Oxford, England to live until October this year.

During their stay, the pair will work for Major Motor Sport to pay their way across the country as Guy races through the rounds.

Guy described his passion for motorsport that is driving him towards representing South Australia.

“I love rallying for the thrill it gives me, the adrenaline rush and the atmosphere, and I love all the places the sport takes you to,” he said.

This time, Guy and Steve are determined to ensure funding does not stop them from making their way across the world.

Both men said they are willing to sacrifice for the chance to compete.

“I’ve sold my rally car that I won the state title with last year, as well as my Ute and both Steve and I have borrowed money but we still have a way to go,”Guy said.

The pair have budgeted $95,000 to fund their trip to the United Kingdom and have $13,000 yet to raise to make their dream attainable.